America’s Cup – A first sail on the Waitemata

American Magic completed a milestone five-hour sailing session on Auckland’s Waitematā Harbour on Monday. The team’s AC75 racing yacht, DEFIANT, had been dormant since concluding its final training day at the team’s winter base in Pensacola, Florida in early March. 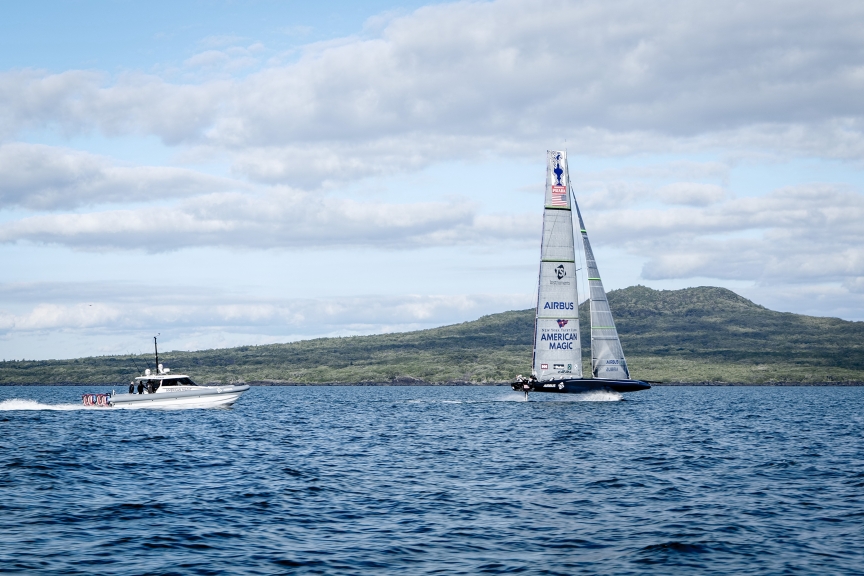 A combination of cancelled America’s Cup World Series events in Europe, the team’s COVID-19 safety precautions in Pensacola and a 9,000+ mile ocean journey to New Zealand kept the team on shore for nearly five months. While logistics, design work, the production of American Magic’s second AC75 and other projects kept the 145+ person Challenger busy, a return to sailing was welcome.

“It’s just nice to be back to doing what we’re meant to be doing,” said Terry Hutchinson, Skipper and Executive Director of American Magic. “[Today we had] perfect conditions to be out in the harbor, and out in the Hauraki Gulf. It wasn’t too windy, perfectly flat water. Reminds you a lot of Pensacola.”

In terms of the team’s overall plan, Hutchinson said that despite all of the unexpected challenges brought on by COVID-19, the campaign for the America’s Cup was on track. “When we started our planning prior to COVID-19, it always had us sailing in early August here in New Zealand,” said Hutchinson after a valuable day of testing equipment and systems.

“Reliability and performance and and racing are all completely linked together. And with the boat [today], it was great to see everything working reasonably well. To bring it together as a team is a great effort by everybody involved. There were a lot of pieces to the puzzle.”

A theme throughout the world of high performance sailing, from junior events, to the Olympic Games and to the America’s Cup, is that time spent at the racing venue correlates to racing success. Even when competing on a boat as advanced as an AC75, knowledge of the venue remains a key part of any Cup-winning equation.

“There is a high priority of sailing at the venue, of getting our team settled at the venue, and of learning,” said Hutchinson. “A lot of us have raced on what is probably the main [race] course, and we’re going to use that. But some of us haven’t sailed on the other courses. I’m a big believer in being settled as a team and having us focus day in and day out on the sailing. Moving to Auckland at this stage has allowed us to do that.”