How Comanche Took More Than a Day Off The Transatlantic Record

The supermaxi Comanche broke the transatlantic record for monohulls (west to east) in July 2016, taking more than a day off the record. Here’s how 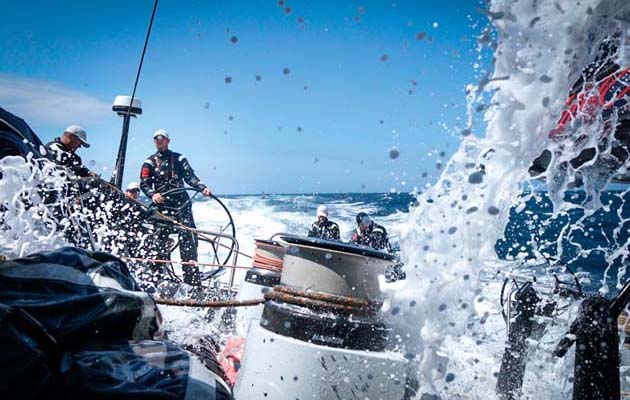 No sailing record has a more storied history, or is harder to beat, than the transatlantic record. At a time when sailing records are being divided into smaller currencies and made with greater frequency, this is the big one. Ever since 1905, when Scots skipper Charlie Barr reduced it to 12 days in Wilson Marshall’s 56m/185ft three-masted schooner Atlantic, it has been a grand and famous prize.

On 28 July this year a new high water mark for this famous record was set when the 30.5m/100ft supermaxi Comanche crossed the finish line of the historic course from Ambrose Light, New York to The Lizard Point in Cornwall. She had finished a job for which she was built. The crew completed the 2,880-mile course (sailing 2,946 miles, only 66 miles farther than the Great Circle distance) in 5d 14h 21m and, in doing so, Jim Clark’s super-machine and her all-star crew bettered the previous record by well over a day.

The record Comanche broke is notoriously hard. That is why the last incumbent, Mari Cha IV, had hung onto it since 2003. Comanche, unlike the 42m/138ft Briand-designed schooner that preceded her, is an insanely powerful contraption with massive beam at the stern, long reverse sheer, a mast well abaft 50 per cent of the boat length, a towering, narrow mainsail and a long boom overhanging the stern. Comanche was built for raw speed with the wind abaft the beam.

But to break the record, the yacht needed mainly reaching conditions to take her all the way across, riding only one weather system. And it had to be the right kind of low pressure, not too fast and not one that would fizzle or be blocked before it reached Ireland.

“We needed a low pressure that was strong enough to make it all the way to the English Channel,” explains Stan Honey, the team’s navigator. “The question for Comanche was: could we find a system that was slow enough that she could stay in front of it?”

Honey went back to 2004, downloaded historical weather data in GRIB format and ran the boat’s polars starting every six hours from June through November for every year since. “What I found,” he says, “is that there was, on average, only two [suitable] systems per year.”

In June, Comanche returned from the Newport-Bermuda Race. Skipper Ken Read had his pick of 30 of the world’s best sailors, to be on a rolling rota over a three-month period, ready to go at a moment’s notice. Boat captain Casey Smith prepared Comanche. She had always been designed to sail in manual configuration, as world speed sailing records forbid the use of stored power, so the hydraulic pit winch and sail controls could instead be powered by rotary pumps.

One of the things Stan Honey had discovered was: “If you succeeded, it [would be on a weather pattern that] was reaching and running, so we took fewer sails and removed the daggerboards.” Taking the boards out saved 400kg. Upwind sails that would not play a part in record conditions were left ashore.

Twice the weather looked as if it was shaping up right. There were two near-misses when airline tickets were bought and crew were on their way to the airport only to find that the forecasts had changed. But in July a suitable weather window appeared, and continued to improve. This was a low that was travelling slowly by virtue of an old warm front left over and a weak leftover low on the north-west edge of the Azores High.

At the right speed for Comanche, and with a low probability of overtaking her, it could potentially carry her on south-westerlies all the way. It was Code Green. 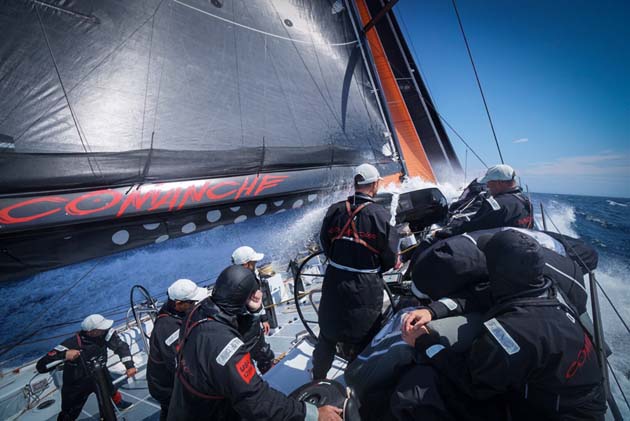 Her crew headed out from New York late in the evening of 22 July. After all the planning – six long years from concept to this point – Ken Read was not aboard. He had a prior commitment to commentate at the Louis Vuitton America’s Cup World Series Portsmouth. The team decided to go ahead. “It was helpful for us all to know how rare this weather was,” says Stan Honey.

The first few nights at sea were difficult and there were times when the record hung in the balance. First, Comanche had to negotiate a line of thunderstorms. Behind these the wind fell light and they slowed. A hold up of an hour or two may not seem that critical, but it was worrying for the crew because it increased the odds that they might fall off the back of the low pressure system. Typically, this is how records fail: a breakage or some other delay kicks you out the back door.

But past that the boat was, Casey Smith remembers, “ripping along”. They were doing 550-mile days; they were blasting. Though it was mainly grey and overcast, that did not dampen the mood on board. True to the forecast, the sailing was, Smith says, ideal.

There were 17 crew on board, the fewest Comanche had ever raced with. Since conditions were not expected to vary greatly, they weren’t going to be doing many sail changes. Smith remembers doing only five sail changes during the record. “Normally we might do that in a day,” he says.

The only sails used apart from the main were the A3, Comanche’s VMG-style running sail, up “90 per cent of the time” and the FRO, or fractional reaching Code 0.

Comanche’s actual track is in black. The theoretical optimum route from the GFS HO weather analysis is in blue.

At times there was fog, and the radar and AIS watch was intensified. “Fog is always the case with transatlantic records, as you’re doing it in the warm sector,” says Stan Honey. “It’s all grey and every bone in your body tells you you are going to get pasted, but because you are travelling along with it you don’t.”

When the record had its hairy moments, it was because the breeze faded. “Once we cleared out of the top of Newfoundland and through the ice areas that was our lightest period of the race, 15-18 knots,” says Smith. “We had to be very careful. But we were still doing 18-20 knots [of boat speed] and the breeze soon built up.”

But was it rough? Smith just laughs. “Maybe we are going to have to tell people we had 5m seas. No, it was as calm as I’ve seen the Atlantic. We wouldn’t have seen a swell over 2m. Although between the warm and cold front we had lousy visibility, the wonderful thing is that you get flat water and because you are moving with the system seas are just starting to build.” He thinks the maximum wave height was even less. “Never more than 1.5m,” he declares.

“It seemed to be that we were so well lined up on the system that we’d advance to run out of wind down to below 20 knots and then the wind would slowly build up and then run out. That’s how much on the front edge of the system we were. We’d poke out of it and come back in,” says Smith. “ But in flat water and breeze, doing 500+ mile days, we were just coming on home.” 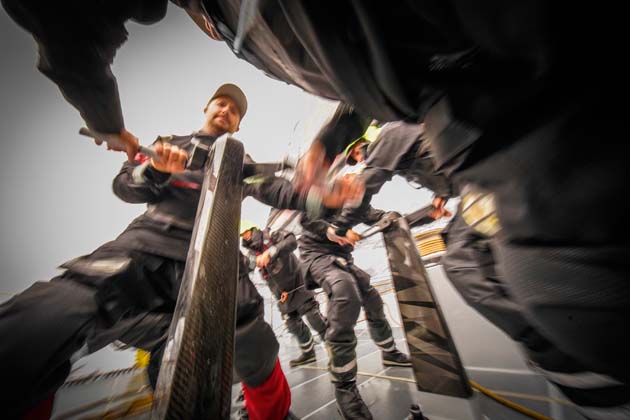